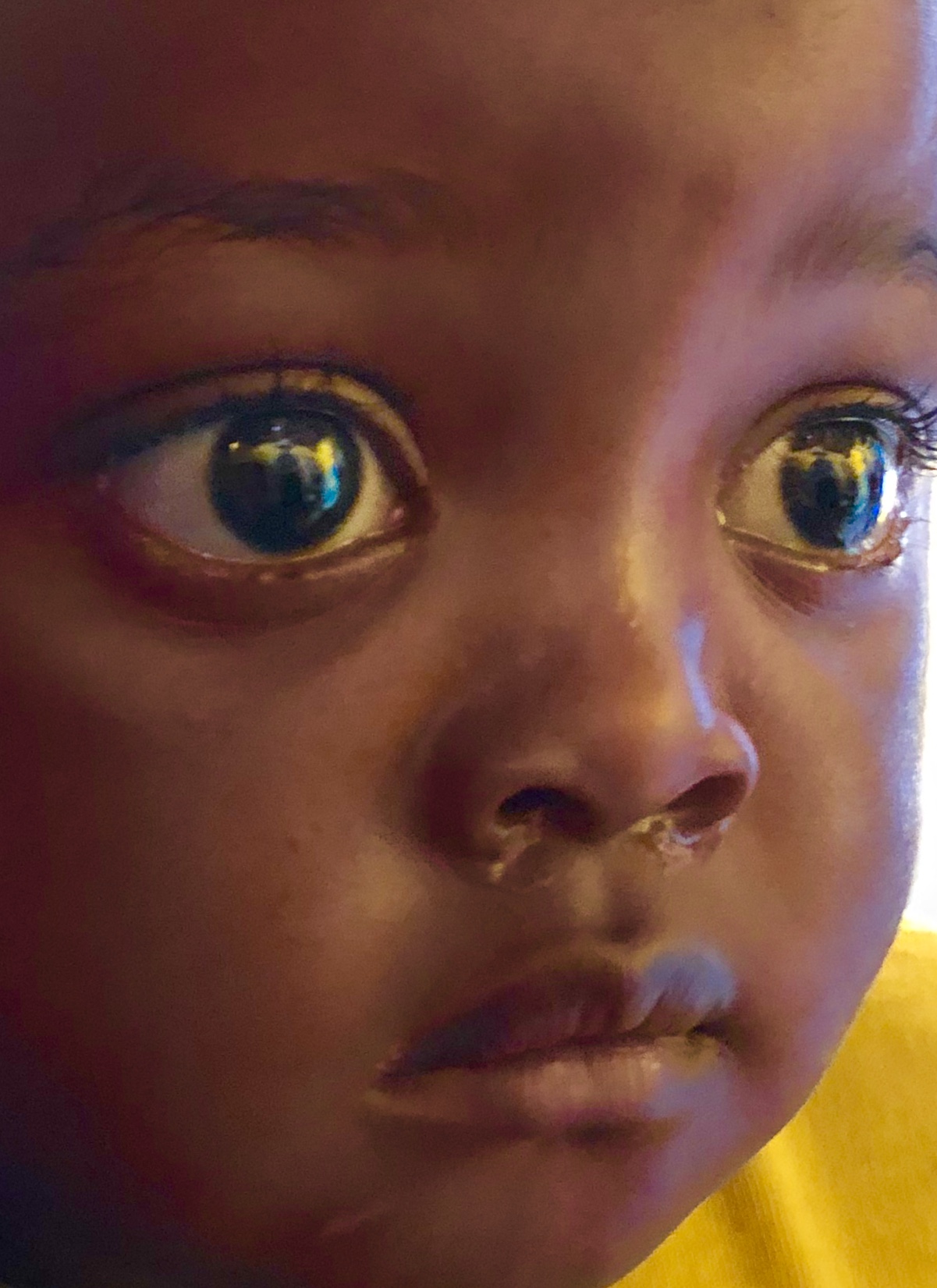 In Zambia’s distant Northwestern province, both the Lunda and Luvale tribespeople of the Congo find an easily porous border in the bushlands between their country and Zambia.

The Congolese come south to buy mealie meal, which is ground white maize, which boiled, makes the Zambian national food, nshima. Think of nshima as smoother corn grits, served in shapes like croissants. One can pinch a portion of nshima between one’s thumb and all the other fingers and use it to sop up cooked vegetables, chicken, or fish.

Congolese cross south to buy sacks of that ground mealie meal. Zambians cross north to the Congo for shoes. Real quality shoes. The Congo, formerly colonized by the French, has some fine working shoe factories, and the Congolese are much more interested in manufacture and business than farming and grinding mealie meal. So both parties go where they can cross the border freely at will, after which, many Congolese like being near all the farms and foods, and make their way here to the Copperbelt region of Zambia and specifically to Baluba because as a refugee settlement, even with so many transients, it has become the Little Congo of Zambia.

One of the most incredible feelings I have ever experienced happened to me today. Two years ago, a beautiful Congolese woman came to our clinic at Baluba. I did not see her arrive. I noticed her in a crowd, and I remember exactly where she was standing. Gil and I learned that she spoke not only perfect English but exquisite French, and more than one African language. Her parents had owned a beautiful home in the Congo. Her family had been well-to-do. But one of the Congo’s many brutal conflicts sent them fleeing for their lives. They crossed into Zambia as poor refugees. Life as they had known it, happy and comfortable, was gone.

As Justine talked to Gil and me in 2017, I became mesmerized, or more precisely, it’s as if I were slowly remembering her from a time I could not place. She had the calm bearing of a holy person. Her cheekbones, her deep eyes, her jawline, her prominent clavicles, the rich color of her skin, her headdress—all of these features were stunning—but there was something about Justine I could not point to physically which made me love her sooner than is possible to explain. The familiarity may have been in part that Justine reminded me of a woman named Anna Scott I had loved like second mother when I was a little girl. But really, when I remember and analyze encountering Justine two years ago, I can not explain why the connection was there.

I wanted Justine’s photograph more than I had ever wanted any other photograph among the richness of beautiful faces in Africa. So I asked if she would allow a portrait. Back in Virginia, I made a complex painting, 5’ x 4’ oil on canvas, called Constraints, in which Justine’s profile features prominently. In 2018, when we returned to Baluba, we came with large color photos of Justine in my painting to present to her. Those photos carried enormous meaning for me, again inexplicably so. Yes, it’s nice to bring someone a remembrance, but I wasn’t just bringing a nice gift to Justine. Being able to show her what I had captured about her in my painting meant being able to respond to explain artistically what it was in her which I could not logically explain knowing with such familiarity. I asked someone to help me locate Justine here in Baluba, and again I have no way to explain the intensity of my grief when I was told that she had died.

Last September, I was honored to return to my alma mater, The College of William & Mary, to deliver a keynote address about my art and my view of art, during the 100 Years of Women at the College celebration. For that occasion, I took my painting Constraints with me to Williamsburg. Justine hung in the Andrews Gallery there in a lovely exhibition for several months. Today, on the drive back to Baluba, I was remembering several people from here I have known over the years, children I have watched grow up whom I hoped I would see again, and a room where one patient died in our clinic. I also mourned Justine.

Midday, Gil, who had gone down to get prescriptions in Pharmacy, walked back into our Wound Care station with her arm around Justine. Simultaneously, we embraced one another, I started to cry, she was wiping my tears, she took my hands in her face and looked me in the eyes, radiant, and explained: “I am alive!” Later, I asked who had told her that I had thought she had died. “No one,” she smiled, “I read that depth of sorrow in your eyes. But here I am. I am alive!”

Again I have no way to explain what I believe happened today. I finally did get to show Justine my portrait of her, which made her throw her head back and laugh. She thought it was great. I joked with her about whether she was really here, and whether she has wings. We gave her gifts, and we laughed together, but before she left, I told her: “This day has changed my life.”

How? I now know the feeling of seeing someone you had mourned (and that you believed is dead) walk into the room. And what she kept saying to me is I AM ALIVE.

I saw and felt not what it would be, but what it is like for a dead person suddenly not to be dead. Nothing we said to one another today could explain our happiness to see and be with one another again today. We had met once, exactly once before, so how could this reunion have had me in tears for hours?

In these days, we can not do other than confront the connections and active rearrangements of life, death, disease, reunion, resurrection, and mystery.

Through all the hardships today in Baluba, open breast abscesses, a poor woman delighted to be pregnant with twins, another poor woman who needed transport money to the Ndola hospital to have some chance of addressing her young daughter’s incontinence, a sad young boy who was kicked out of school because his eyesight was poor, we worked to treat, heal, and solve.

Two of our team, OMNI Vice President and dentist Doug and new team member April, had their birthdays in Baluba. When an OMNI team member has his or her birthday in Zambia, that person’s gift is to select some patient in our clinic to supply food to, to be able to feed for an entire month. A frail and sad old man with an amputated leg who sleeps on an earthen floor under a relative’s roof and who has no food or money was selected.

So was Baluba’s Community Organizer, Jen. She has 10 children of her own, and had already taken in 4 orphans. Two years ago, when Jen’s daughter had a 1-month-old daughter, a motorcycle crash killed Jen’s daughter. One of her friends said she would care for baby Isabella, since the father had already died of HIV. But the friend rarely fed Isabella, and today we saw her.

Baby Isabella looks maybe 8 months old? She is not. The little girl you see pictures here is over 2. Her teeth have not come in. She is stunted. She is beautiful—she has the face of God, as the OMNI pastor reminds us—but she also has the face of chronic malnutrition. Her mentition, her intelligence, her future are already severely impacted.

One elder woman, Regina, our first patient of the day, swept her arms wide and bestowed upon all of us on the Orphan Medical Network International Team this prayer:

Wherever you are going, I pray that you should all—that we should all—stay blessed. 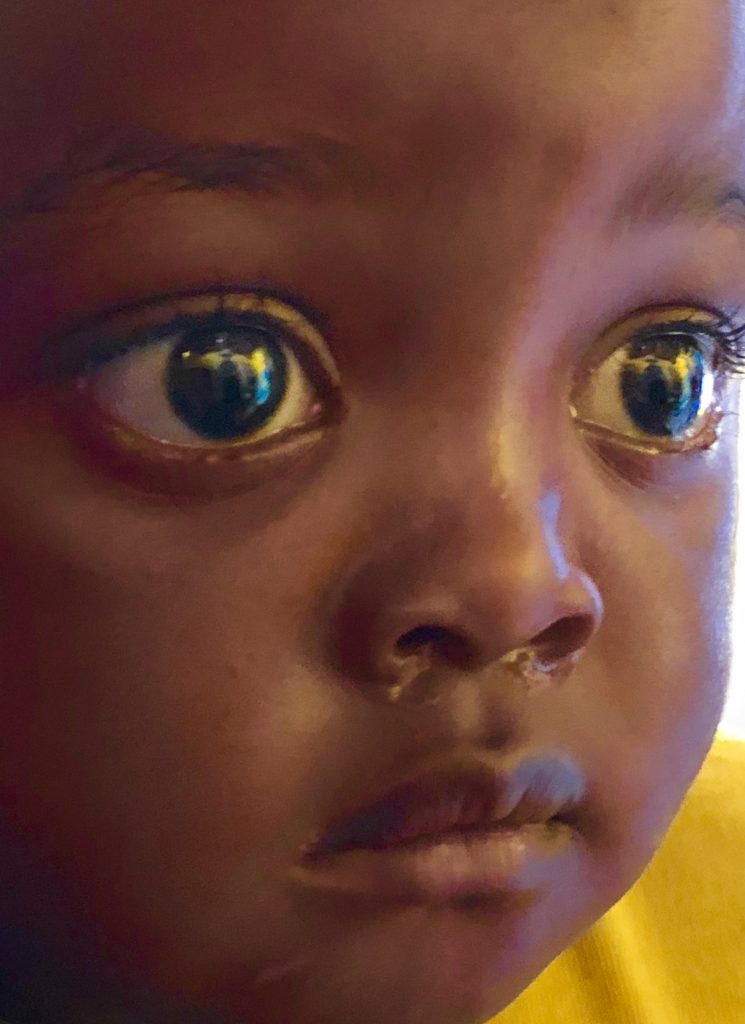