Also, there is one dairy farmer. Walking barefoot with his diminutive switch, he vaguely directs his testy herd of long-horned cattle out to scrub pasture, who nevertheless trot over within yards of our clinic. This year, however, we were virtually ignored by these imposing animals, which is different from last year, when the massive lead bull made it his hero’s mission and thoroughly rammed our bus, not once, but twice, which is why the village has since erected the idea of a flimsy bamboo fence, which unfortunately could be knocked over by a rooster.

The village roosters, speaking of those cocky devils, must be napping, but not the hens and their teenage chicks. All day, they have wandered unperturbed among our duffels and tables and patients, their constant saucy backward kicks raising little puffs of dust as they scrounge and print a higgledy-piggledy path resembling my handwriting when I’m taking notes on index cards in our bumpy bus.

Last year, here at Kasongo, we were offered the wild carmine intungulu fruit, which tastes of salty grapes, and which one pulls like peanuts from under the dove-grey soil. This year, the bland yellow amankolobwe is ripe, round and yellow and seeded inside not unlike okra. Also, the red, and and the larger white guava, along with  and paw paws are all in season now, and, judging by the children and their tottering ladders, the giant avocado trees are beginning to yield.

The mango trees are in bloom, covered in triangular clusters of butterscotch flowers on magenta stems. Each flower-cluster produces more than twenty, in fact “uncountable mangoes, enough to fill a basket, and you will see the tree hang low with the weight of so much fruit,” my friend Lioness explains, who teaches The Expressive Arts, drawing and music, at our OMNI school. The small mangoes ripen in September-October; they are followed by the larger mangoes in November-December.

These are the sweet features and rhythms which decorate a farming community.

But as if from vanishing points, from fields far away in some slow past tense, and from the dusty-dry nearer village paths, in trudge the souls suffering deep chest coughs requiring suspensions of amoxicillin, lacerations requiring tetanus injections, split feet from rough walking requiring washing and Vaseline, pregnant teenagers raised by 20-year-old sisters, and malnourished mothers requiring humanitarian aid, recurring (post-treatment) malaria requiring re-treatment , two year old Michael with bilateral club feet, requiring money for transport and corrective surgery, almost universal dehydration, requiring powdered vitamins and electrolytes dissolved in bottles of clean water, and suspected domestic violence victims, requiring our steady patience, understanding, love, and assistance, all of which we gave and gave and gave from our hearts.

Each OMNI station worked tirelessly today, breaking only to walk across a scrub field to use the squat rooms—stumbling over stubby young anthills and burnt maize cobs—one toilet area for the gents, and the cleaner one for the ladies: so declared Godfreda, the baritone village midwife with a Viking’s laugh and a fantastic weave whose ancient bicycle has raced her to deliver hundreds and hundreds of Kasongo babies.

Doc Margaret walked to Wound Care at 6 p.m., distressed: “I’ve got a 5-month-old baby being raised by the mother’s sister, because, for some reason, the mother can’t raise him. Baby Ackim is being fed only porridge. How can we help him?”

So we gave the beleaguered stand-in mother rice and salt, gloves and socks and a winter hat, soap and a washcloth, pediatric vitamins, and 200 kwacha, 20 dollars, which may now feed and hopefully strengthen faltering little Ackim, wrapped tightly in a colorful chitenge sling, for at least the next month.

And we left the powerful birthing attendant  Godfreda an abundant supply of bleach, soap, rolled bandage, gloves, toothpaste and toothbrushes, a plastic basin, and a dozen life-saving birthing kits.

Each birthing kit includes: a 6’ x 3’ length of plastic for the woman to lie on so she is not on the dirt when she delivers her baby; a candle and matches in case the birth occurs at night; a pair of gloves for the birthing attendent if one is avallable; a single-edged razor blade to cut the umbilical cord; two lengths of string to tie off the umbilical cord; and a small towel and a bar of soap to clean the precious new child.

The cost of a birthing kit, Nurse Gil once figured, is $1.37, and each one saves two lives. Money well spent. 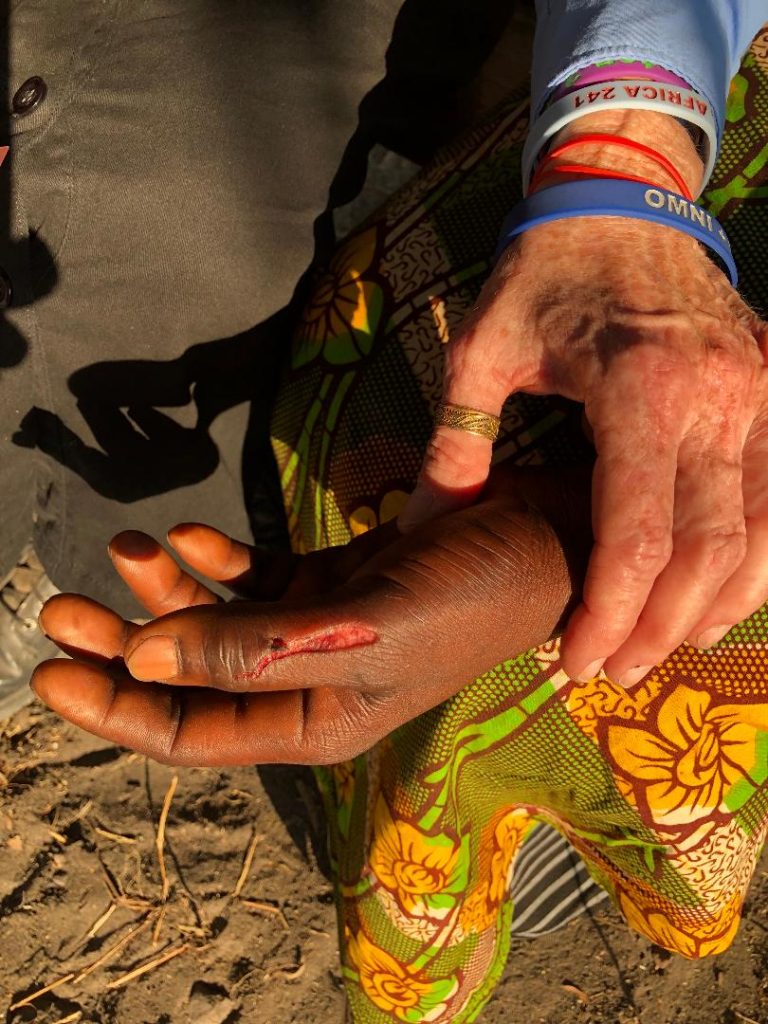